This morning I heard the news that theologian Marcus J. Borg has died after a prolonged illness. In my generation of Episcopal seminarians it was nearly impossible to not have read Borg's works.
Borg was the author of 21 books, including my favorites:
Meeting Jesus Again for the First Time (1994); The God We Never Knew (1997); and The Heart and of Christianity (2003).

I had already selected Borg's Convictions for our Living in Faith series Wednesday nights in March. Now the choice is even more poignant.

Borg challenged me to think, and like John S. Spong, though I might not agree with all of his conclusions, I grew in reading his works.

Read more about Borg here.  And pray for his family.
http://www.marcusjborg.com 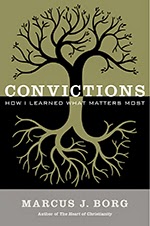 Convictions, my newest book, is a bit of a memoir, even as it is not an autobiography.

Rather, it combines the triad of memories, conversions, and convictions. Memories – of growing up Christian and American more than half a century ago and what I absorbed then. Conversions – major changes in those understandings that have happened in my adult life. Convictions –foundational ways of seeing and living that are more or less settled and not easily shaken (but are neither dogmatic nor closed to change).
The book was birthed in my experience of turning 70.
What was then my home congregation, Trinity Episcopal Cathedral in Portland, Oregon, where my wife Marianne had been a priest and canon for eighteen years and I a member for the same period of time, invited me to preach on the Sunday of my 70th birthday.
I had taught there frequently and had been bestowed with the title “canon theologian.” The title does not mean that I am a priest. I am not. Ordination is not a requirement for becoming a “canon.” Rather, Marianne tells me, “canon” means “big shot.”
Preaching on the occasion of my 70th birthday to a congregation in which I was known emboldened me. Though for many years, I have not been especially timid, that occasion led me to think, “What are the convictions that my life has led me to that I most want to speak as I turn 70?” If we don’t share those at 70, when will we?
My convictions are about the past and the present. Beginning fifty or more years ago, my intellectual passion became the study of the Bible, Jesus, Christian origins, Christian history, and to a lesser but substantial extent, other religions.
From that study – convictions about the past – has emerged a set of convictions about what it should mean to be Christian today. And to be Christian and American today, the cultural context that has shaped me and that I know best.
My working title for this book was “what I wish every American Christian knew.” I am convinced – convicted – that if American Christians knew and embraced what is in this book that it would change American Christianity – and American society, culture, and politics.
Posted by Mark B. Pendleton at 3:10 AM