Returning to Cuba: A Poignant Journey 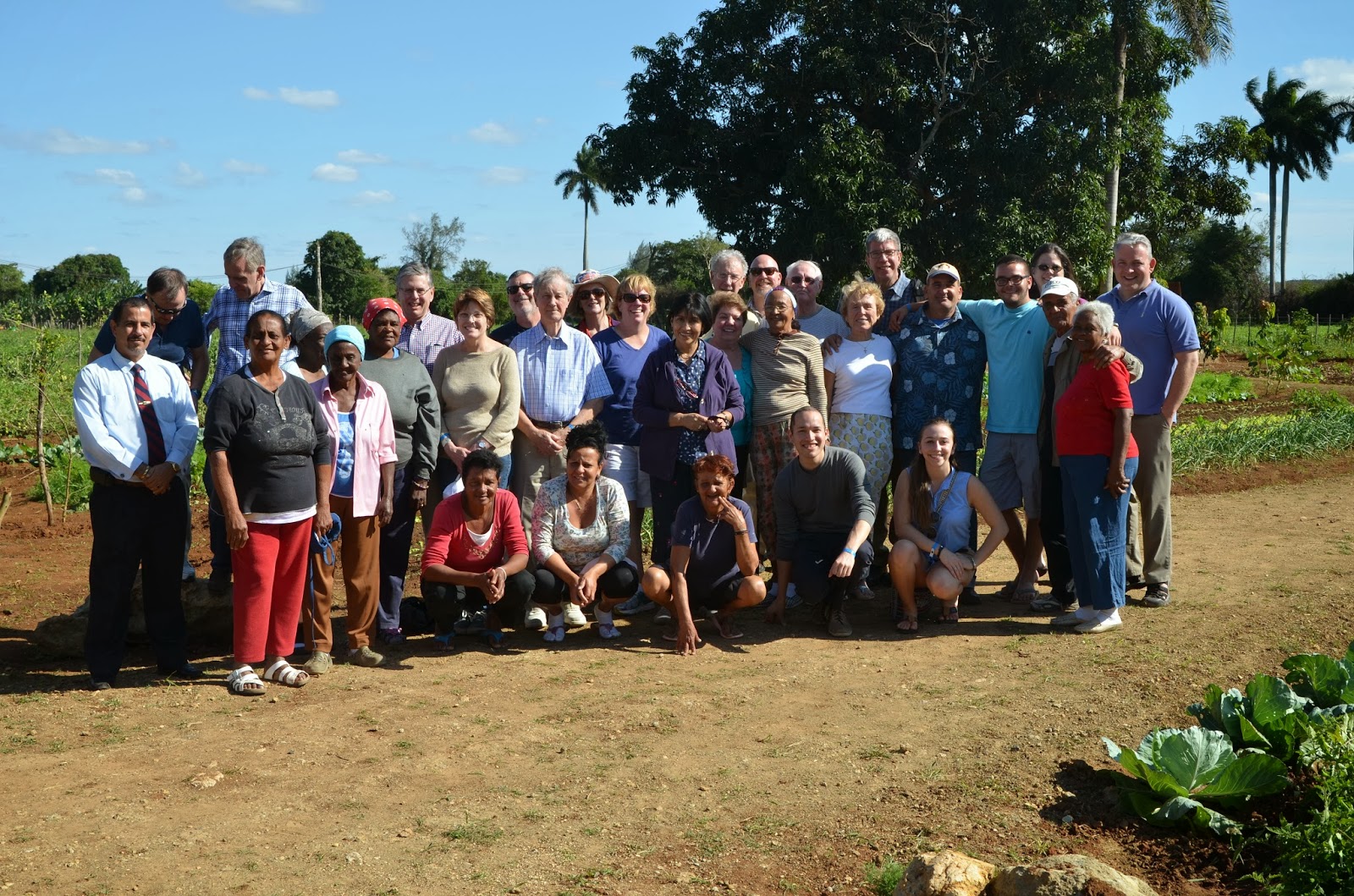 I travel and return to and from Latin America almost every year. Mission trips to Colombia, meetings and vacations in Mexico, a once-in-a-lifetime visit to Argentina to see our daughter during her exchange year. My recent trip to Cuba this month was different. Some context. 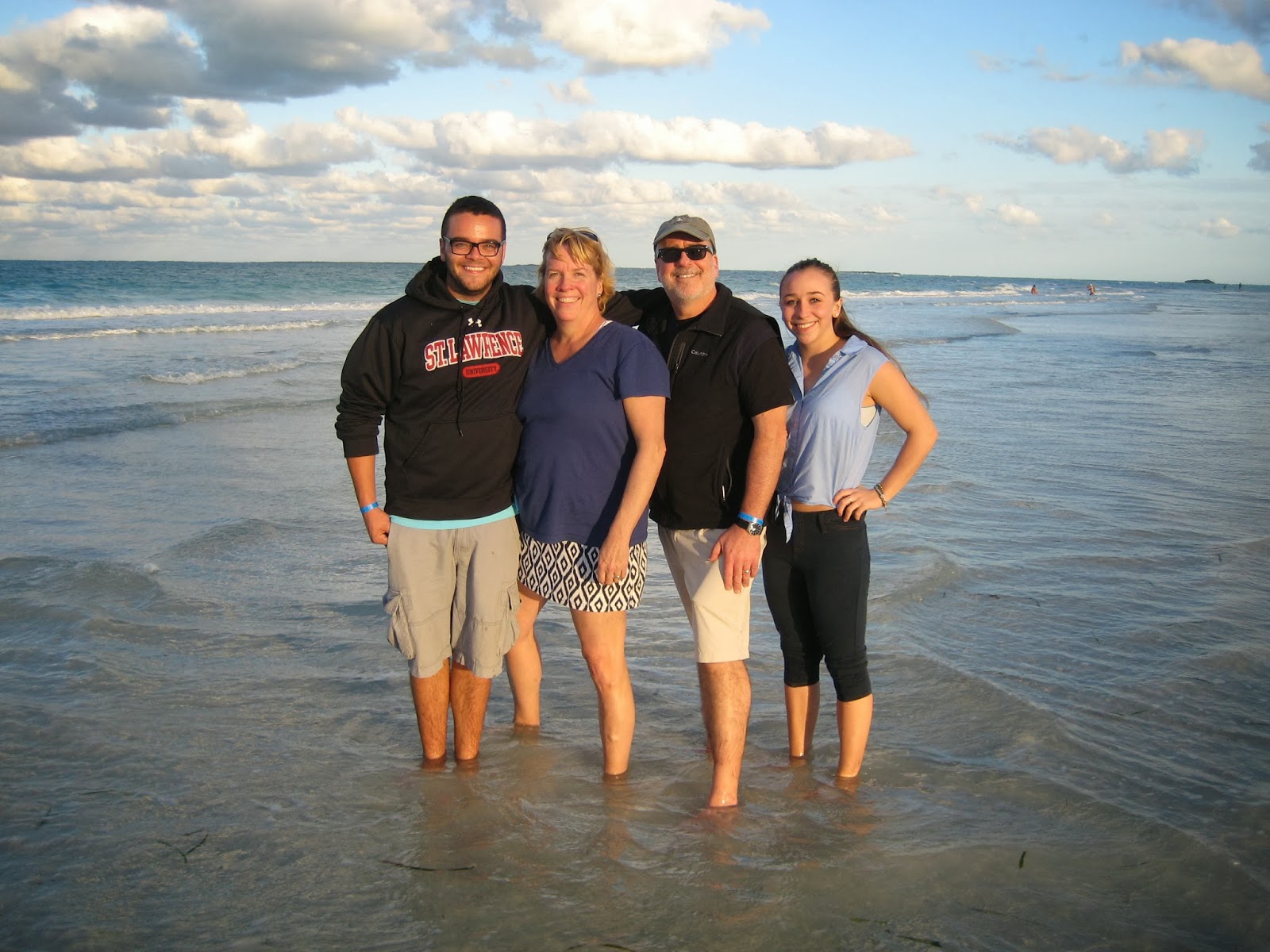 In 1986 I spent a year in Cuba as an official representative of the Episcopal Church – sent from the Diocese of Florida during the early years of their companion relationship with Cuba. Since I was then a postulant for ordination, it was natural for me to spend a year studying at the ecumenical seminary two hours east of Havana before I entered seminary in New York City. The mid-1980’s were, looking back on it, a special time to live in Cuba: the flood of tourists and development had not yet arrived, there were no prostitutes and beggars in the streets that would later arrive with the tourists, and the Soviet Union had not yet collapsed – thus ensuring billions of rubles continued to prop up a perennially faltering economy. It was for a foreigner with a few dollars to spend and with a free and ready exit from an otherwise tropical police state -- a more “innocent time.”  In the years that followed my return to the States, the Soviet Union collapsed, the country went through a painful “Special Period” when hunger was very real and what ever trappings of an anti-imperialist planned economy had long ago given way to billions in investments from Spanish, German and Canadian hotel chains.  Time marched on. 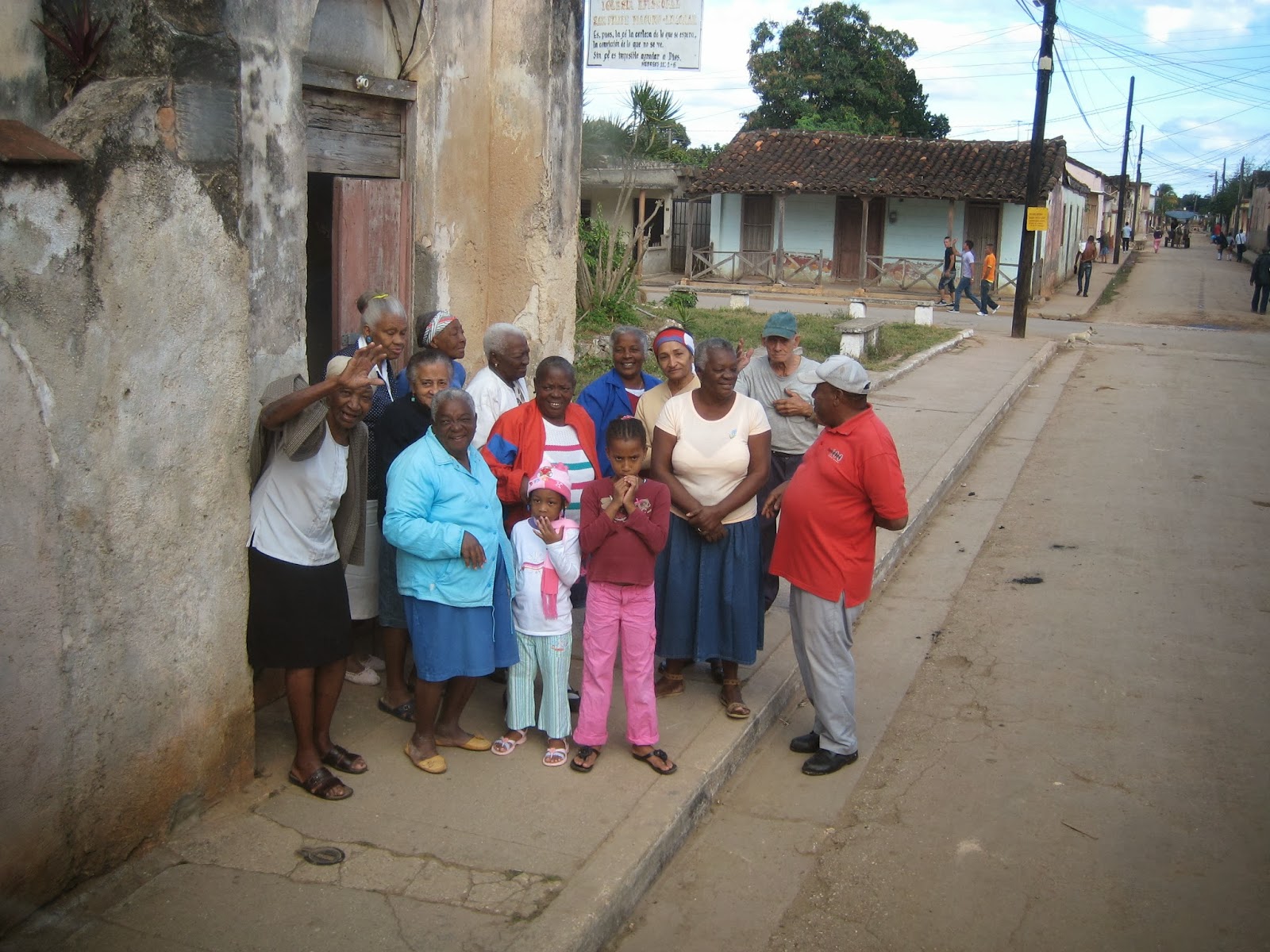 On my return to Cuba this month, accompanied by parishioners and colleagues from New Hampshire and board members of the Episcopal Church Foundation, my main personal goal was for a family reunion with our son Will, who is spending a year as a Young Adult Service Corps volunteer.  You can visit his blog here. Here  or http://pendletonyasc.blogspot.com/ 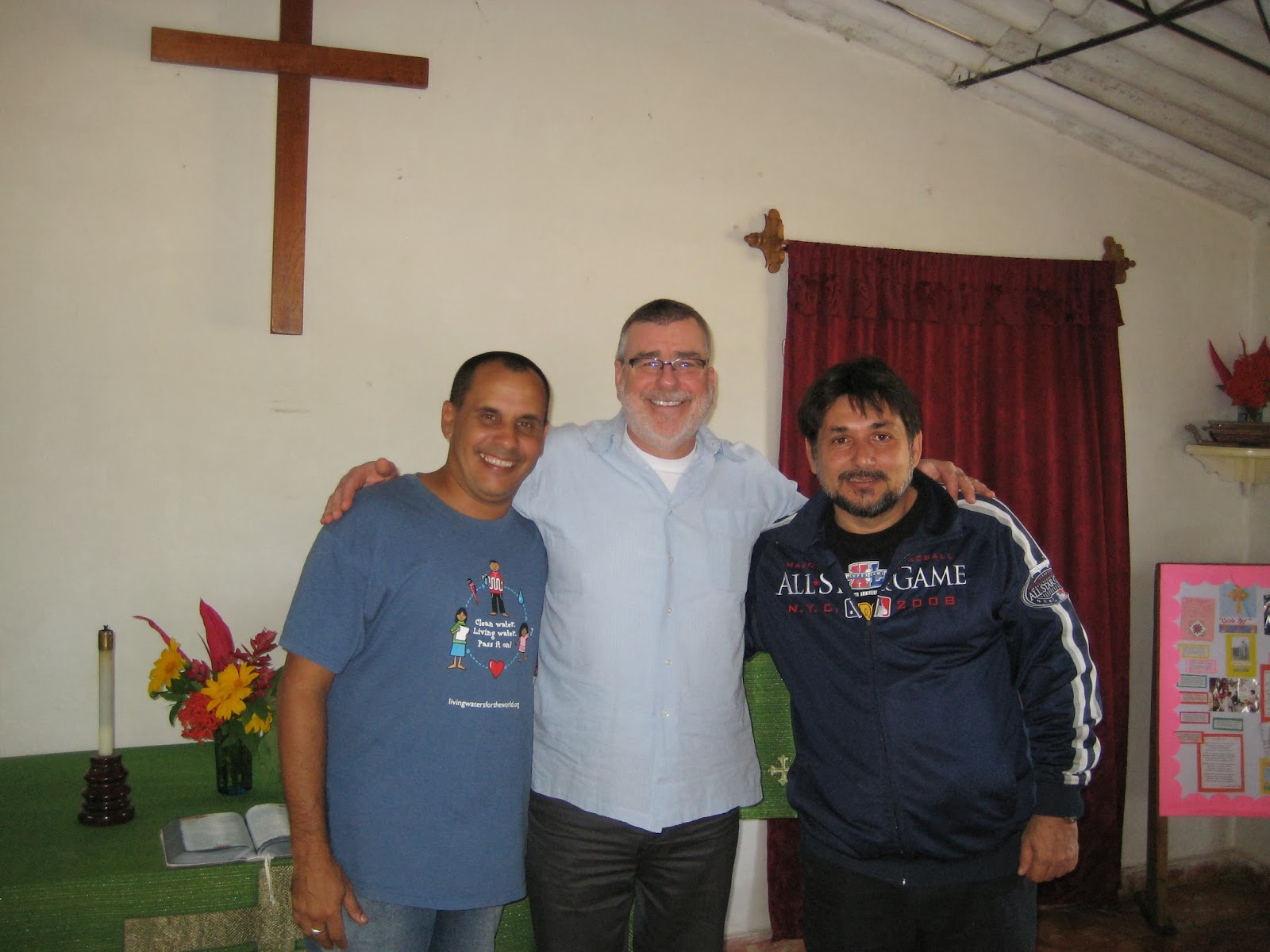 For me it was a joy to see my son Will enjoying Cuba in much of the same way I did 28 years before. Amazing really. He is living with my former seminary classmate in Cardenas. Will is traveling the same roads, attending church gatherings and probably making the same mistakes I made. How often can a parent pass on a love for a country and a similar opportunity to be one of only a handful of Americans to live openly and travel widely around Cuba? Very rare indeed. Clearly as parents we are proud. As a father, my pride comes with a fair dose of nostalgia and longing.  I am no longer at  the center of attention, riding around in vintage American-made cars stuck in the time warp of Cuba time, learning about the roots of Santeria – the Afro-Cuban religion – and going out until the early morning hours in the nightclubs that are particularly Cuban.  Many of my memories have been refreshed are now being played out by “Mini-me” who is apparently more Cubanized than I ever was. 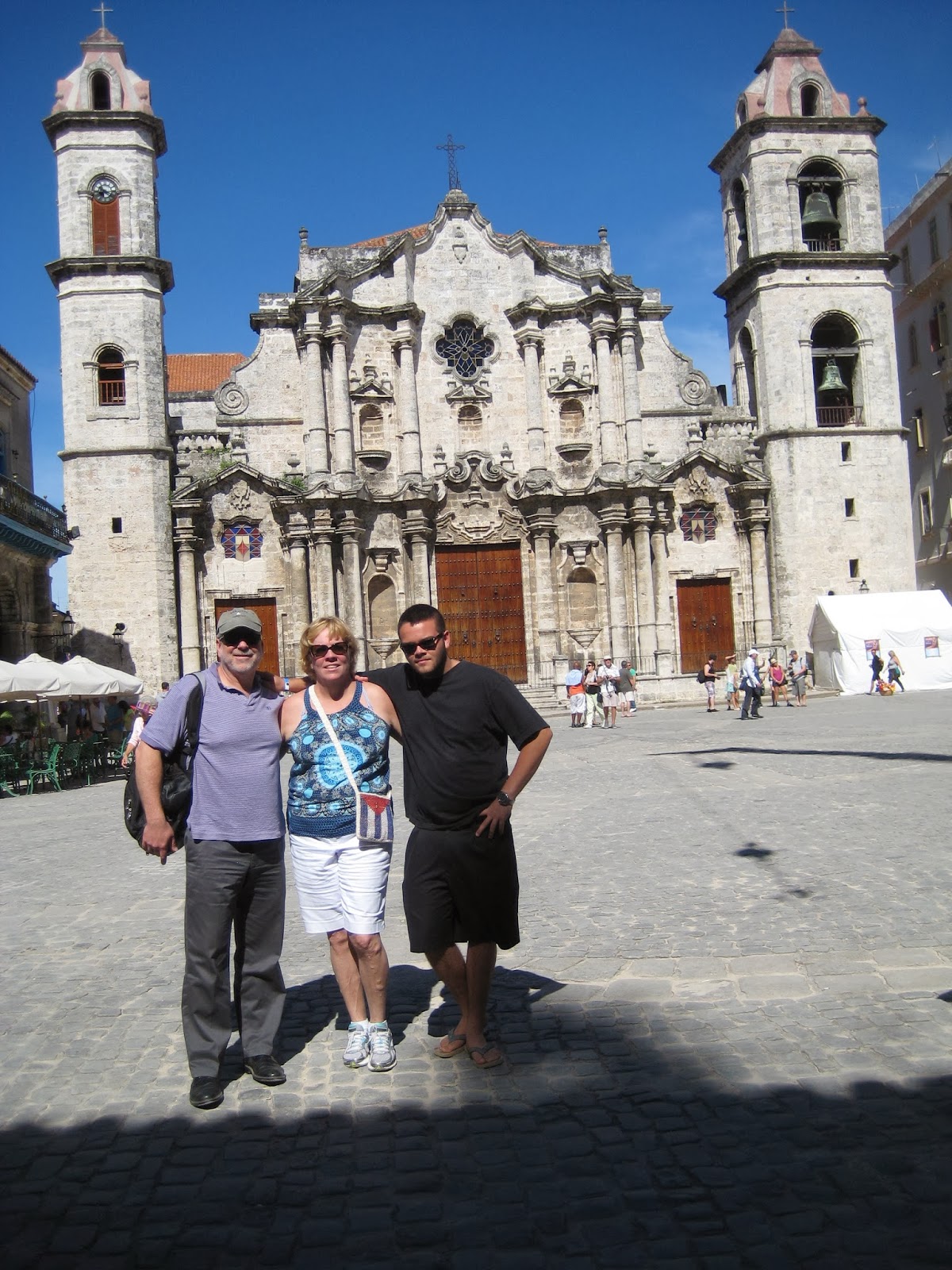 In revisiting some of the churches and sites I had seen decades ago, and reuniting with friends and active lay leaders of the church, I return from my trip to Cuba with a deep pang of -- I don’t know what -- loss perhaps. Time marched on for them and me over these years, yet seeing it all over again reminded me of my privilege and their sacrifice.  Over these nearly 30 years I have traveled the world: they have remained on this limited island. My two annual trips to the dentist and American toothpaste have left my pearly whites in fine shape: friends my own age look older and their grins filled with gaps and swatches of silver. There was food in seeming abundance, unlike the hard 1990’s, yet it all depends on who has access to remittances from family in the States. 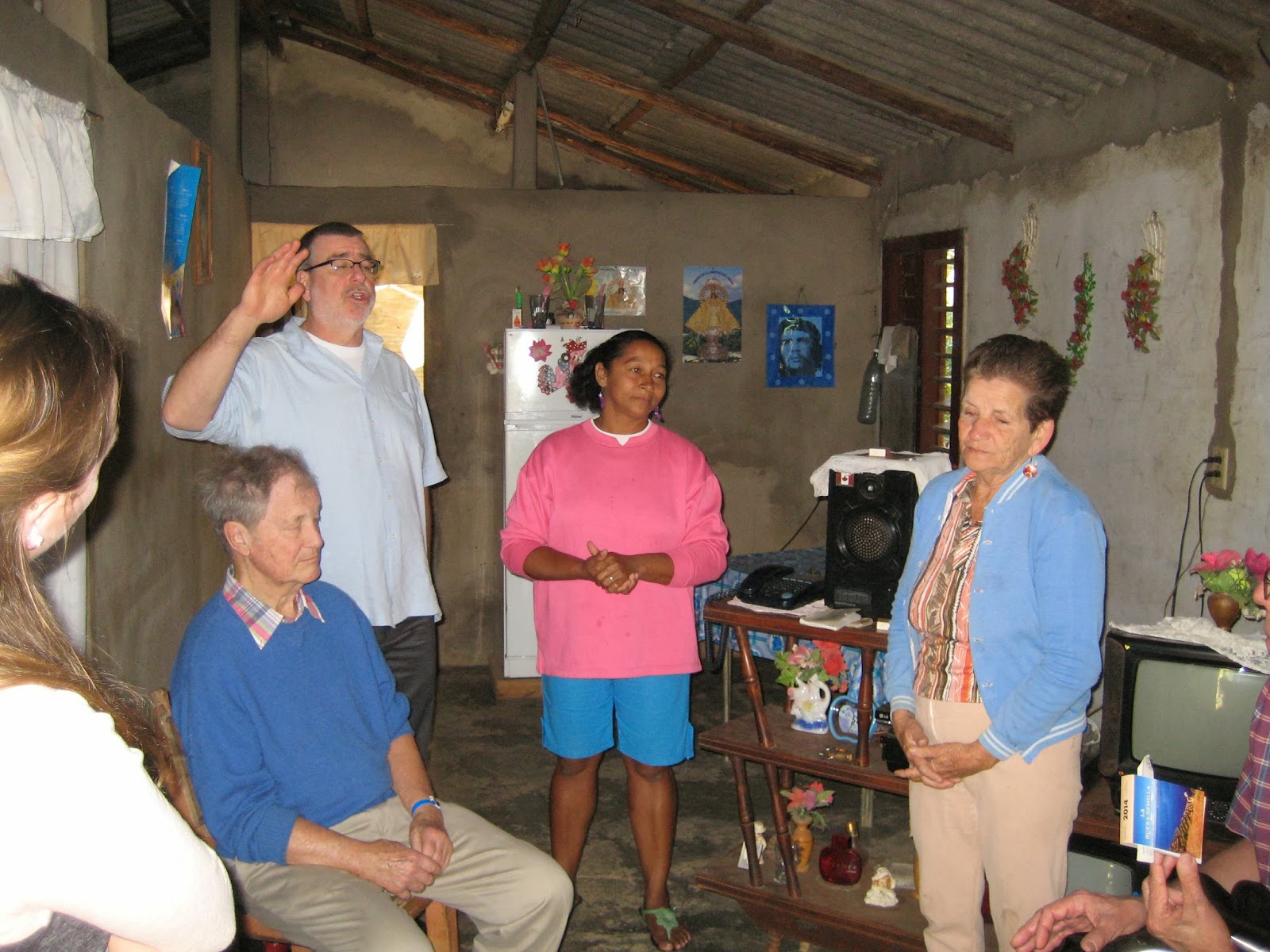 The church service we went to was alive and vibrant and seemed more Pentecostal than Episcopal – which worked just fine for a people of rhythm and innate joy. Even our government employed driver and tour guide took the microphone after the service during the testimonial time to speak of the impact of the service on them. The Church, always such a vital life force in society’s oppressed by politics and poverty, never ceases to surprise and inspire. 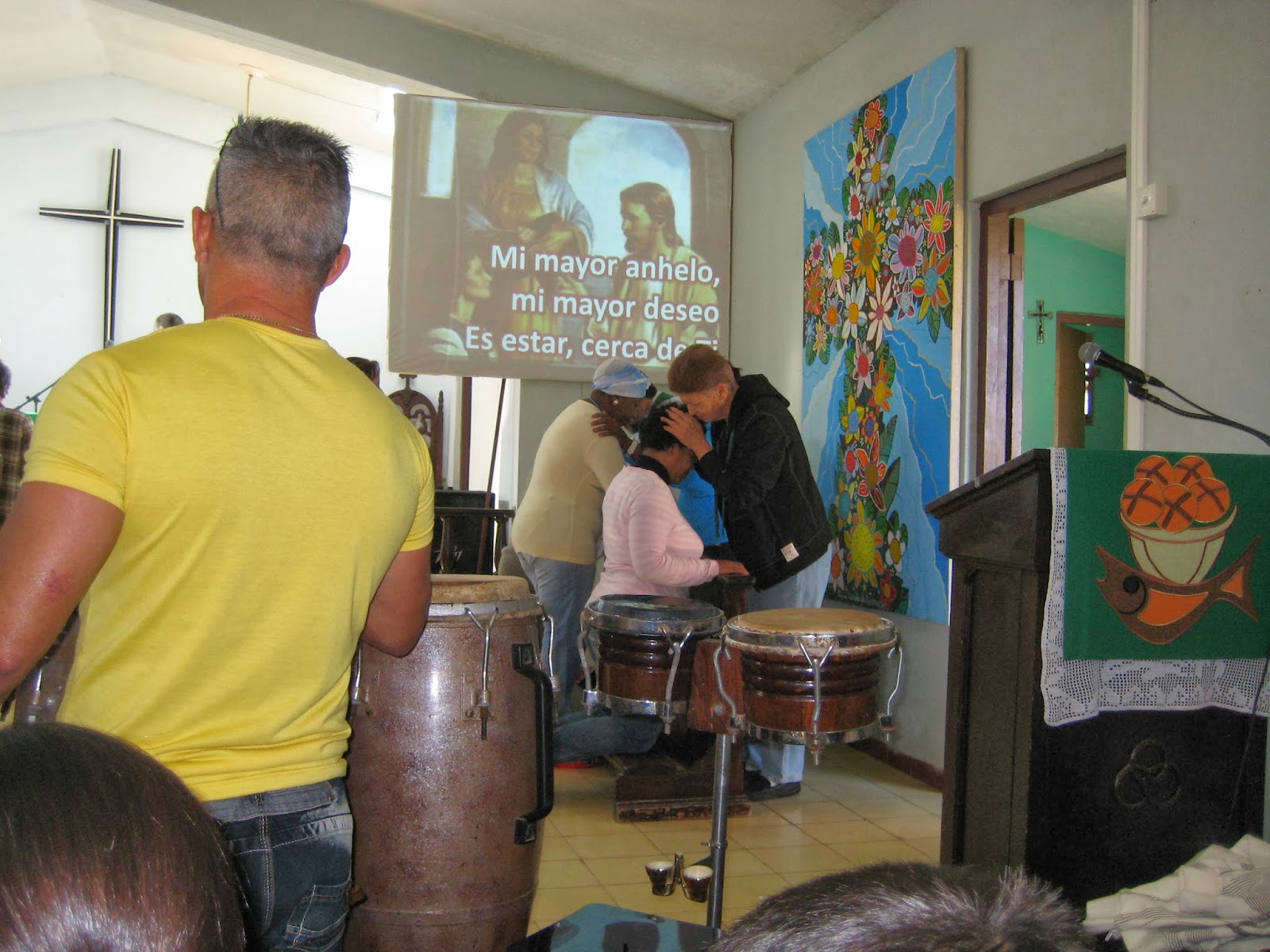 What will the future bring for Cuba? God only knows. The post-Castro years will certainly bring change and perhaps even upheaval.  I believe the people of Christ Church of Exeter can play a role in planting seeds of the renewal and the rebuilding of the physical church in Cuba. The spiritual rebirth is well underway. 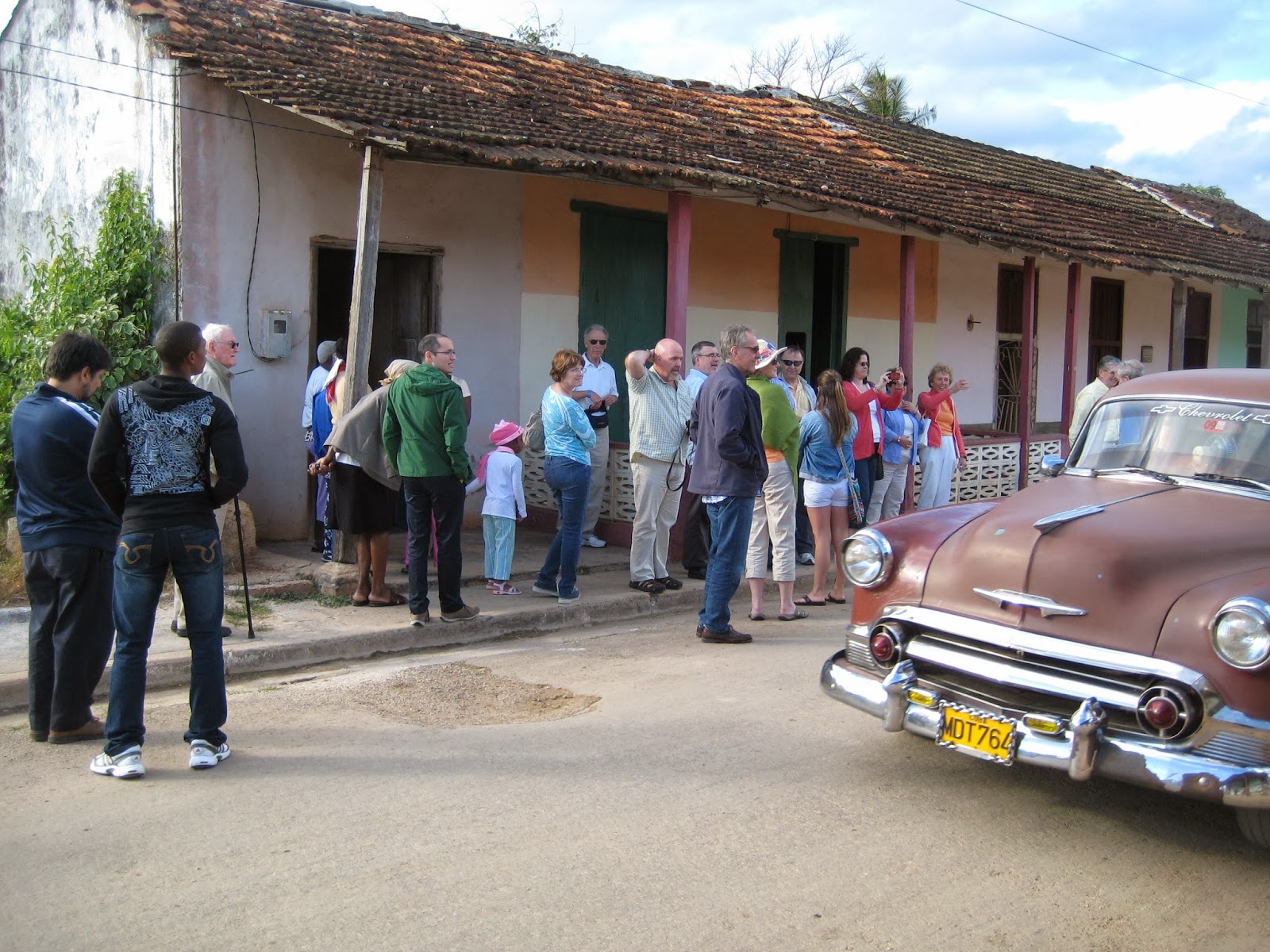 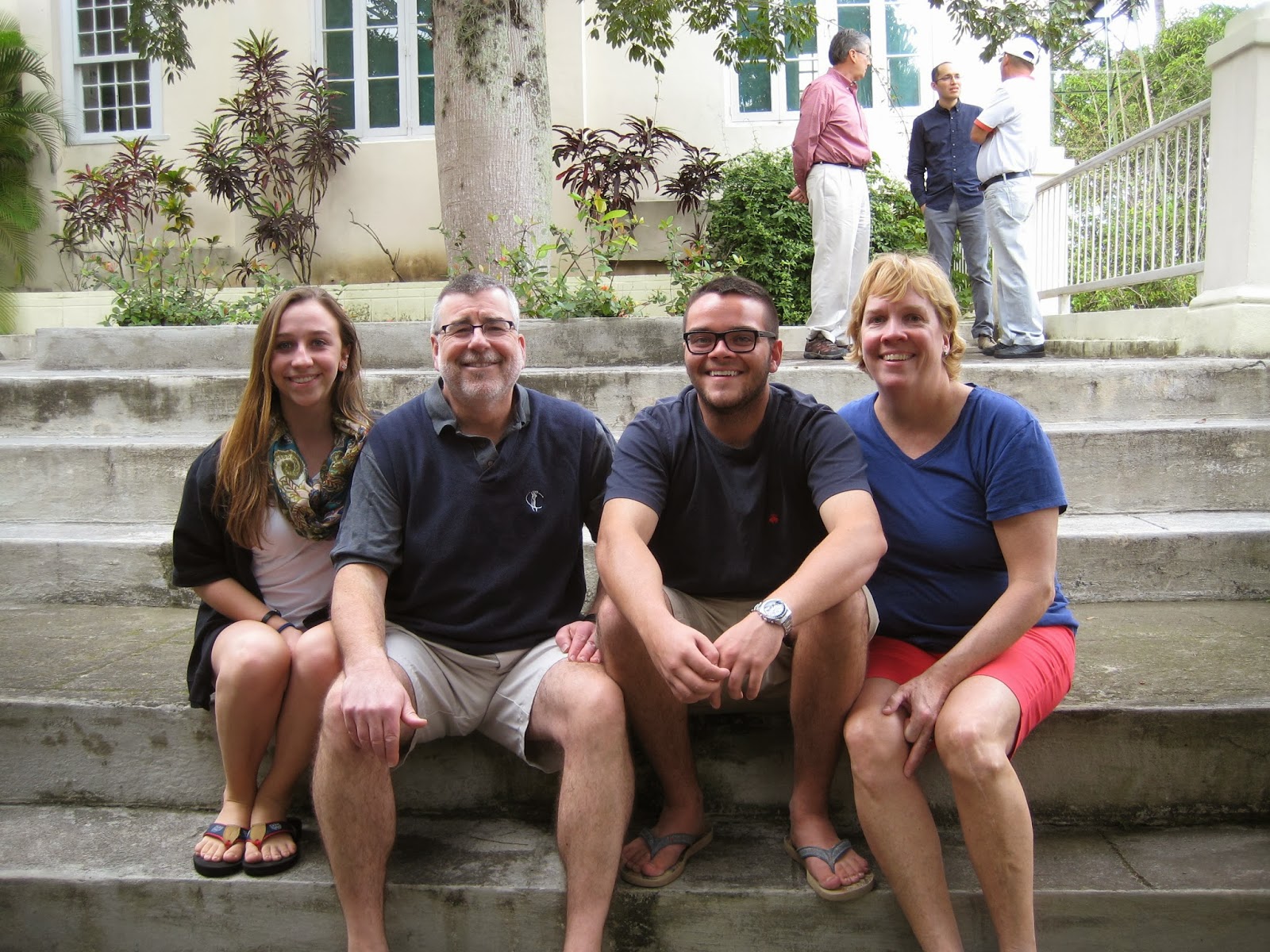 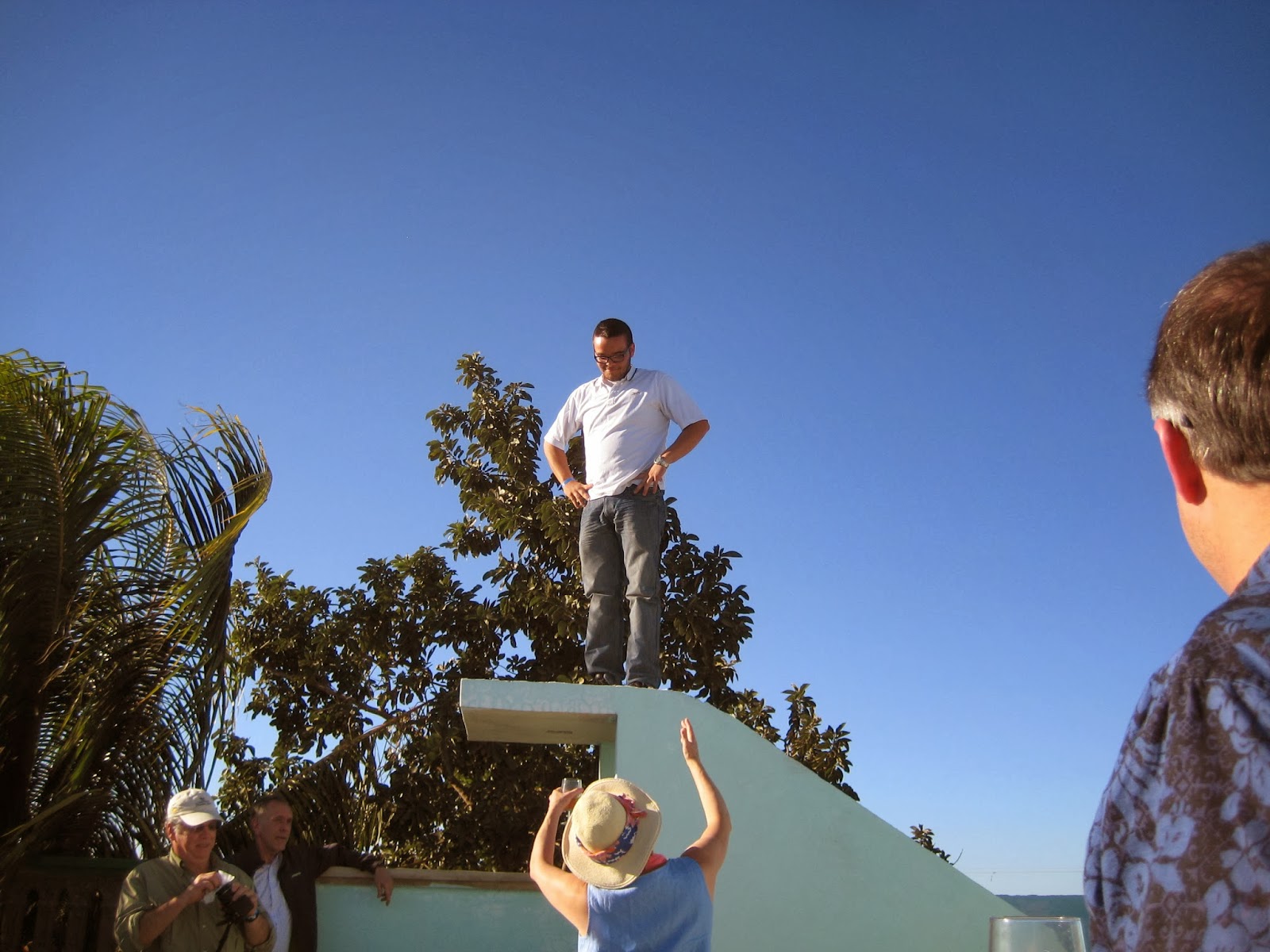